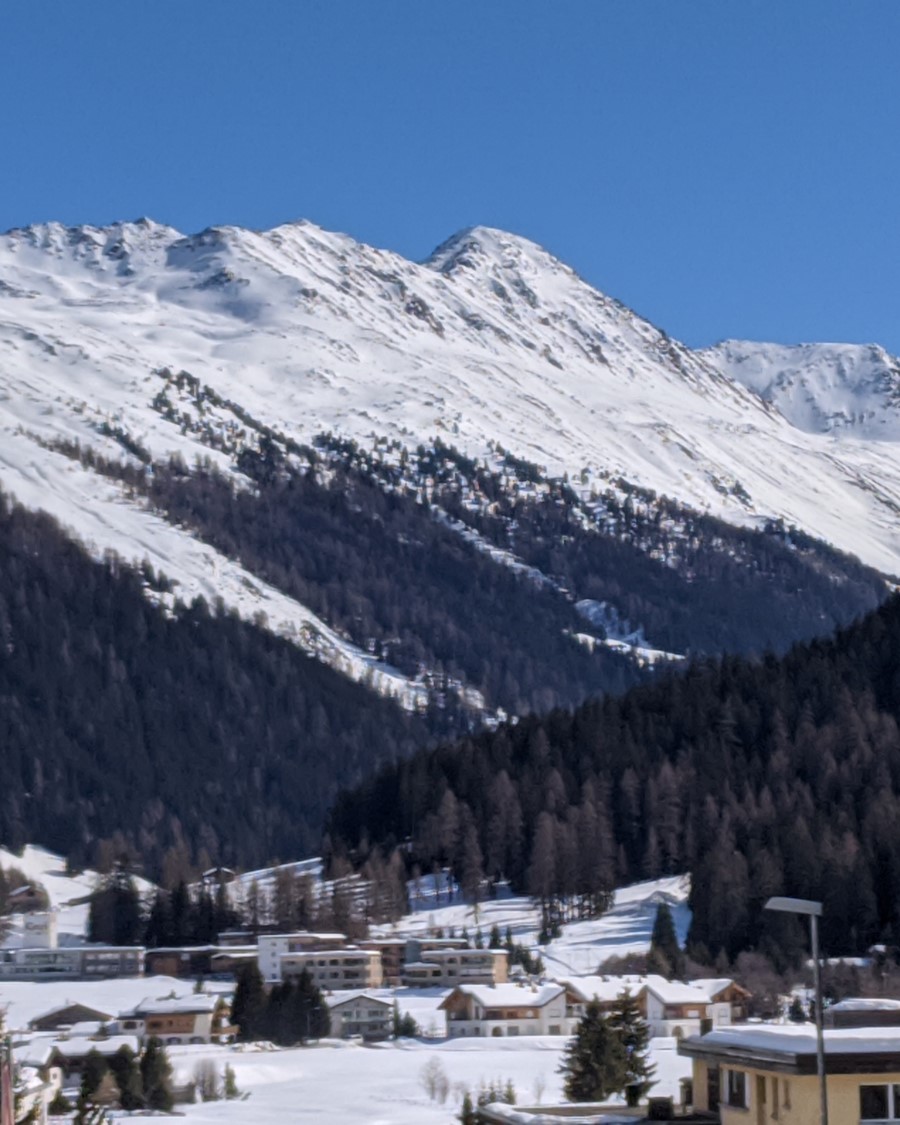 At 1568 m elevation, Davos is the highest city in Europe.

Lenore and I spent Mardi Gras in Davos, Switzerland. Lenore was there to give a speech at the First World Biodiversity Forum, and I was there in the role of accompanying spouse.

Mardis Gras is synonymous with New Orleans. While I have never been to New Orleans for Mardis Gras, I have traveled there many times in connection with my work as a coastal hydrologist. New Orleans is uniquely vulnerable to the impacts of climate change — intensifying storms and rising sea level.

Vulnerability to climate change was on my mind as we departed for Davos. In contrast to coastal New Orleans, Davos claims the distinction of being the city at the highest elevation in Europe. As the train took us further and further up into the mountains, it occurred to me that the Alps might be a refuge from the ravages of global warming.

Soon after we arrived, Lenore and I could sense that there is a side to Davos that it does not share readily with the casual visitor. Davos is best known as the location for the World Economic Forum, an annual retreat attended by world leaders. And, it has long been a destination for winter skiing and outdoor recreation. But, every city has its tell, a distinctive quirk from which one can discover its secrets.

The telling quirk of New Orleans is its hydraulic works — levees, canals and huge drainage pumps. Few of the revelers visiting the historic French Quarter for Mardi Gras realize that until the end of the 19th century visitors could see the Mississippi River from Jackson Square. Today, the view is the back of a protective levee that rises 10 feet above street level. Sandwiched between the river and a tidal lagoon and with much of the city lying below sea level, New Orleans secretly fears the flood. 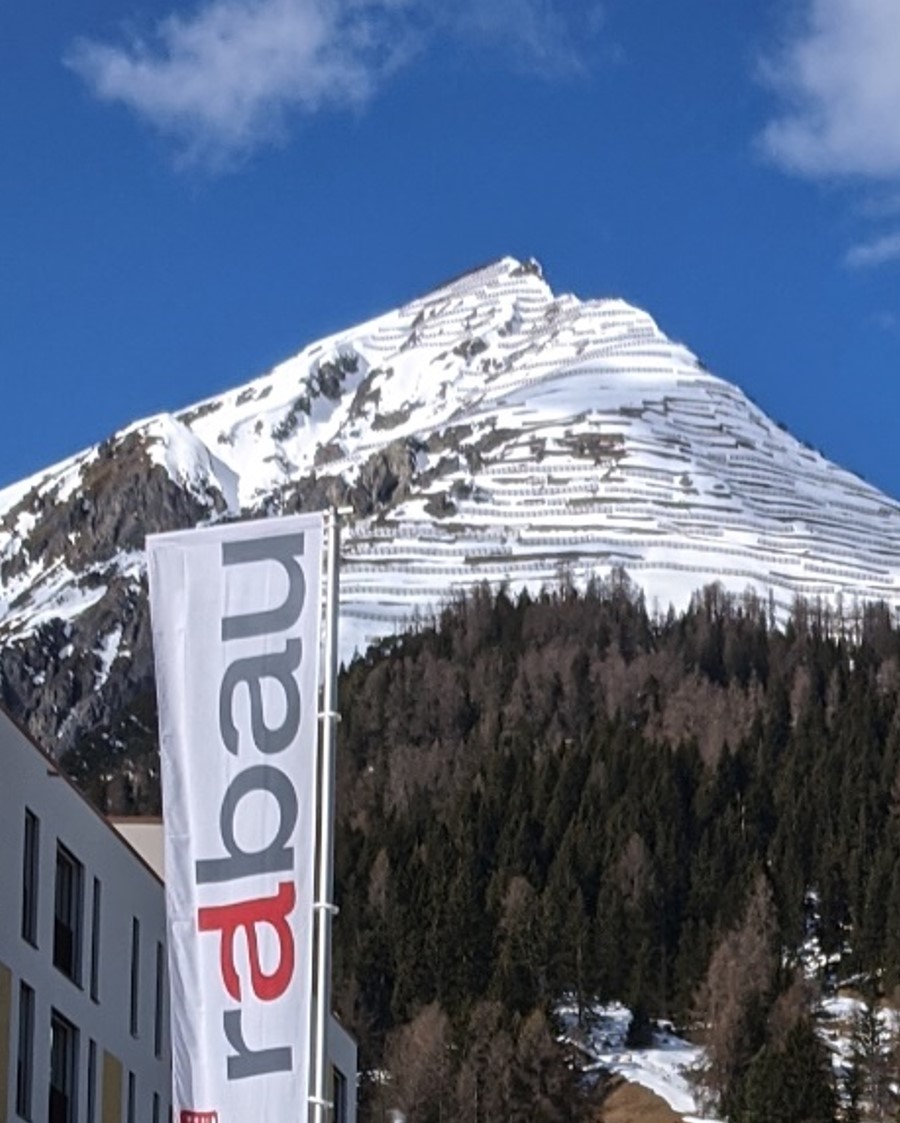 Steel fences on the surrounding mountains protect Davos from avalanches.

I spotted a clue to Davos’ secret on the steep, snow-capped mountain slopes that tower above the city. Rows of heavy-duty steel-mesh fencing installed at strategic locations prevent avalanches of snow from flooding down the mountainside. Below, buildings in the town are built strong as bunkers to withstand the onslaught. A timeline of major avalanches in the region identifies 18 events over the past 200 years — about one every 10 years.

Recently, geologists working in the Alps have identified a dangerous new hazard triggered by climate change, one that threatens to completely alter the face of the Alps within the next 10 to 15 years. Lenore and I glimpsed the source of this hazard closeup when we took the cable car to the ski slopes at the top of Jakobshorn, which towers 1000 metres above Davos. There, I plucked a piece of rock from an outcrop at the peak. I expected that this rock would be hard and resistant to erosion, but instead it crumbled easily in my fingers. 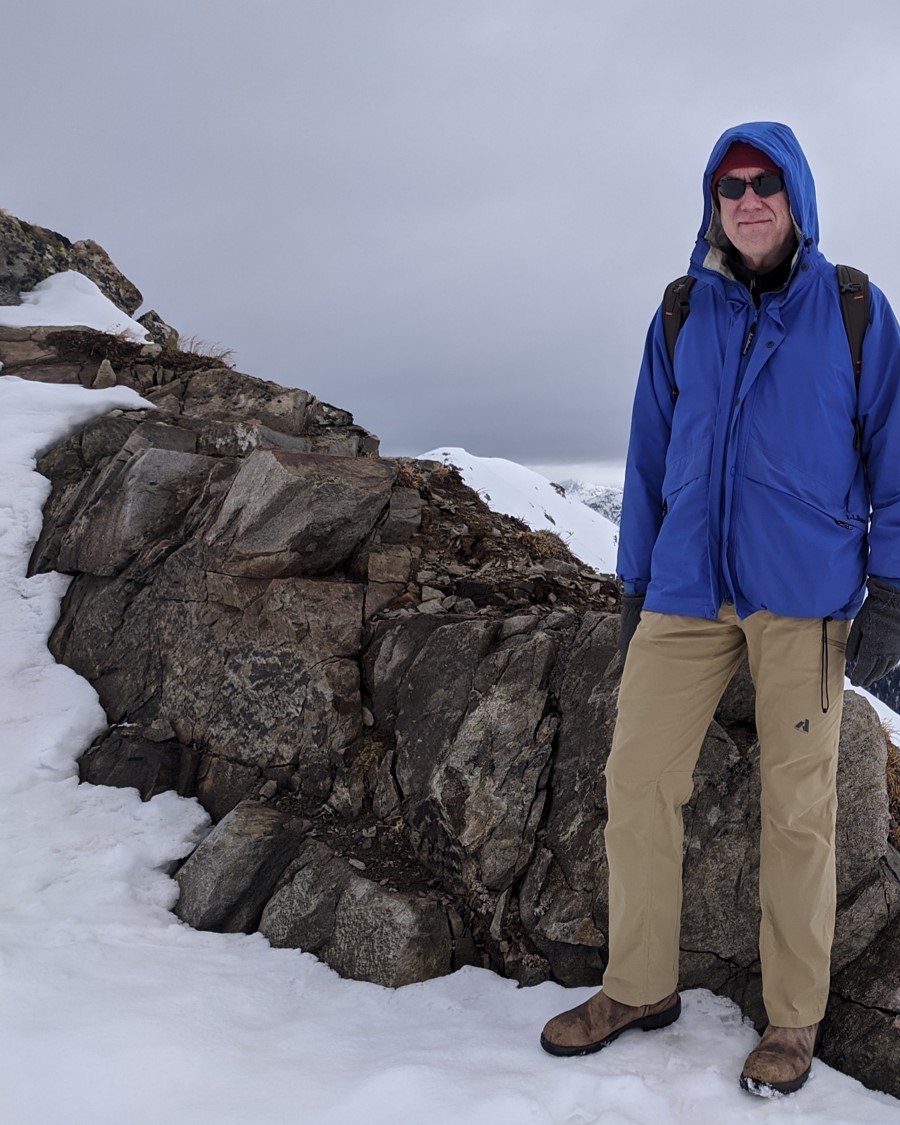 The Jakobshorn peak above Davos is composed of breccia — crushed rock.

The mountain peaks around Davos are not as solid as they appear. The Alps were formed by the collision between the African and Eurasian tectonic plates. Whether from the tremendous forces generated by this collision or from subsequent weathering, the Jakobshorn and other mountain peaks are better characterized as immense piles of gravel held together by ice — permafrost.

Global warming is melting the permafrost in the Alps, and mountain peaks are beginning to shift as a result. Scientists with the Swiss Institute for Snow and Avalanche Research, located in Davos, have noted an increase in damage from floods and landslides in the past 10 years. This trend is expected to continue as a result of the changes in rainfall and temperature expected from climate change.

On March 19, 2019 a large rockslide occurred on the Flüela Wisshorn about 10 km from Davos. The slide closed a hiking trail, but it fortunately did no major damage.

The town of Bondo, Switzerland, was not so lucky. On August 23, 2017, a mountain peak above the town collapsed sending a slurry of 4 million cubic metres of broken rock, ice, and water cascading down into the valley below. Streets were flooded with thousands of tons of what looked like a river of wet concrete. Half the town was destroyed and has been abandoned.


In 2017 Bondo, Switzerland, was inundated by a slurry of rock, ice, and water.


Lenore’s presentation at the World Biodiversity Forum was the Tuesday of Mardi Gras, and we celebrated at dinner with new acquaintances in a nearby cafe. The celebration of Mardi Gras marks the transition between dark days of Winter and the anticipated renewal of Spring. Appropriate to this occasion conversation around the table conveyed congratulations on a successful conference and hopeful talk of reconvening at future World Biodiversity Forums.

However, my spirits were dampened by the realization that the future of Davos and other communities high in the Alps is far from certain. I arrived here hopeful of finding a refuge from the impending chaos of climate change, but what I learned in Davos broke my heart.

This article was originally published on Medium.com , and has been posted on the IAN blog with the author's permission. Original post: https://medium.com/alles-ist-gut/davos-switzerland-broke-this-coastal-hydrologists-heart-7a846a075723