Nitrogen fertilizers make it possible to feed more people in the world than ever before. However, too much of it can also harm the environment. Professor Eric Davidson, director of the UMCES Appalachian Laboratory, has been leading a group of scientists, economists, social scientists, and agriculture experts in figuring out how to produce more food while lowering pollution at the same time. He calls it a “Mo Fo Lo Po”: more food, low pollution. 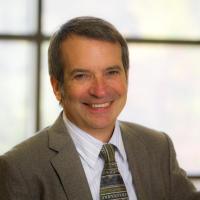 “The main objective is to produce abundant, nutritious, and affordable food and give farmers a chance to make a living, but do all of this while minimizing pollution of the environment,” said Davidson, whose research career has focused on how human changes to the land affect carbon and nitrogen in soil, water, and air.

Averaged globally, about half of the fertilizer nitrogen applied to farms is typically removed with the crops, while the other half either remains in the soil or is lost from the farmers’ fields. Knowledge and techniques already exist to make agriculture more productive and environmentally sustainable at the same time, yet many economic and social barriers still stand in the way of widespread adoption of practices by farmers.

Working with a grant from the National Science Foundation, Davidson brought together a group of scientists, economists, industry representatives, farmers, and government and non-government organization members in 2013 to talk about why there hasn’t been more progress in improving efficiency of nitrogen used in agriculture.

“Our objective is to bring together communities of scientists and stakeholders who would otherwise be unlikely to get together to talk about nitrogen issues as it relates to food security, pollution, human health impacts, global warming, ozone destruction, and the list goes on,” he said.

Less than two years later, the group has produced a collection of papers in Journal of Environmental Quality, published this month. A special section on Nitrogen Use Efficiency, guest edited by Davidson, provides a closer look at the economic, social, and technical impediments to improving efficiency of nitrogen use in crop and animal farms.

The studies explore how the goals of producing more food with low pollution will not only require technological developments, but policies that recognize the economic and social factors affecting farmer decision-making. Read more in "More Food, Low Pollution (MoFoLo Po): A Grand Challenge for the 21st Century."

Davidson hopes to pursue research in Maryland that focuses on challenges of both nitrogen and phosphorus, which have some of the same economic and social impediments.