SOLOMONS, MD (June 21, 2016)--We all know by now that methane is bad for the environment. It’s one of those greenhouse gases that trap heat in the earth’s atmosphere and contribute to our warming climate. It’s regularly emitted during the production and transport of coal and oil, and sometimes even cows get the blame. However, a new study finds that estuaries like the Chesapeake Bay could be contributing significantly more methane to the atmosphere than once thought. Estuaries and coastal systems are thought to be a relatively small source of atmospheric methane, as little as 3%. However, a new study from the University of Maryland Center for Environmental Science (UMCES) found that the methane building up in the Chesapeake Bay alone, if released, would be equal to the current estimates for all the estuaries in the world combined.

“This is just one estuary and there are many others that go anoxic in the summertime,” said study author Laura Lapham of UMCES’ Chesapeake Biological Laboratory. “We need to look at these eutrophic estuaries as perhaps a larger source of methane than we thought. This is a side effect of eutrophication that hasn’t been investigated in the Bay.” 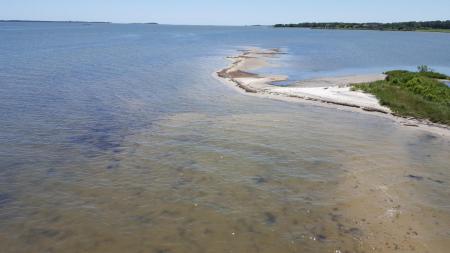 Like many bodies of water, the Chesapeake Bay is overwhelmed with nutrients that cause a type of pollution called eutrophication. Every spring, an influx of nitrogen and phosphorus from lawns, farms, and sewage treatment plants runs into the water of the Bay.  These nutrients feed algae as the water warms up in the summer, causing blooms that suck the oxygen out of the water, causing large areas of low oxygen (hypoxia), known as “dead zones,” that make it difficult for fish, crabs and other underwater life to live. Some areas closer to the bottom and in the surface layers of the mud may suffer from no oxygen at all (anoxic) during these periods.

Since dead zones in the coastal ocean and estuaries are expanding throughout the world, Lapham decided to look at the Chesapeake Bay, the largest estuary in the United States, to understand what happens to methane release in a body of water that undergoes dead zones on a regular basis.

“We wanted to capture the dynamic nature of oxygen and methane concentrations in one of the most well-known eutrophic estuaries,” said Lapham. “We found that places like the Chesapeake Bay could be a more significant input of methane to the atmosphere than we thought.”

Methane is colorless, odorless, naturally occurring gas that is normally under control in estuaries like the Chesapeake Bay. Microbes make methane in the mud, and other methane-loving microbes usually consume the gas. However, when there is no oxygen in the water—as regularly occurs at the bottom of the Chesapeake Bay during the summer time—the microbes can’t do their job and dissolved methane is released into the water column and rests there at the bottom. If a storm rolls through and mixes up the water, the methane can make it to the surface and into the atmosphere. 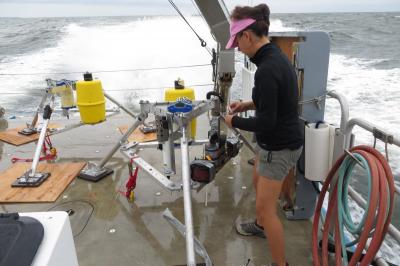 Lapham studied the water at the bottom of the Chesapeake Bay over the course of a summer, setting up instruments perched above the mud that would track any signs of methane being released into the water. She found that in anoxic conditions, when there is no oxygen in the bottom layers of the Chesapeake Bay’s waters, dissolved methane built up, probably coming from the mud, and when storms mixed up the invisible layers of the Bay’s waters, the methane made it to the surface and into the atmosphere.

“Taken together, the time-series data shows that methane flux from the Bay is variable, potentially significant, and dependent upon storms,” said Lapham.

Her team found that concentrations of methane near the bottom of the Bay peaked in mid-July, when the Bay was gasping for oxygen the most, and in the fall when storms stirred up the water and brought the methane to the surface.  They estimated that 85% of the methane in the bottom water is oxidized in the water column in September.

While most of the built up methane was consumed by the end of the anoxic period, methane concentrations measured in surface water samples in June and September suggest that there was still a significant flux of methane to the atmosphere.

The study, “Methane concentrations increase in bottom waters during summertime anoxia in the highly eutrophic estuary, Chesapeake Bay, U.S. A.” by Laura Lapham, Lauren Gelesh, Kathleen Marshall and William Boicourt of the University of Maryland Center for Environmental Science will be published in a special issue of Limnology and Oceanography on methane in the environment this fall.

For 90 years, the University of Maryland Center for Environmental Science has led the way toward better management of Maryland’s natural resources and the protection and restoration of the Chesapeake Bay. From a network laboratories located across the state, UMCES scientists provide sound advice to help state and national leaders manage the environment, and prepare future scientists to meet the global challenges of the 21st century.