A new way to WHALEWATCH

Despite the end of commercial whaling, many whale populations have been slow to increase in number, and one of the reasons for this is continued human-induced mortality. Human impacts including collisions with vessels, entanglement in fishing gear and exposure to underwater noise are major sources of disturbance, injury and mortality to large whales.

In 2007, there were four blue whales (Balaenoptera musculus) killed by ship strikes off California, the highest number recorded for any year (NOAA/NMFS/SWR Stranding Database, 2012). In 2004-2008 there were 18 observed entanglements of humpback whales (Megaptera novaeangliae), in fishing gear off California, Oregon and Washington1.

There is an urgent need for better information on the occurrence and movements of large whale species to help inform policy-making for protection of these species. To help meet this need, the WhaleWatch team is developing habitat-based models and near real-time predictions of the probability of whale occurrence to help inform how human activities can be limited to times and areas of lower risk to whales.

These products are allowing large whale hotspots to be identified, and provide a near real-time tool for determining occurrence and risk to whales using a similar approach to the TurtleWatch tool by Evan Howell (NOAA/NMFS Pacific Islands Fisheries Science Center). Managers and marine users will be able to use our tool to identify hotspots, and also the time or location at which there would be the lowest probability of w 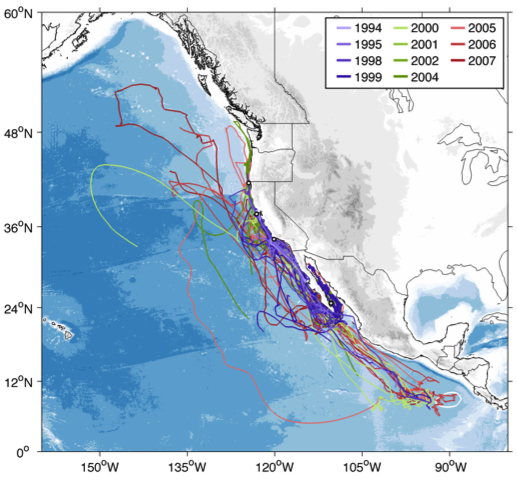 hale occurrence, and ultimately the lowest risk to whales. Above: Blue whale off California being tagged by Bruce Mate’s team at Oregon State University

Our partner in this project is the NOAA/NMFS Southwest Regional Office (SWR). A priority issue for the Protected Resources Division of SWR is to reduce the number of ship strikes and entanglements in fishing gear for large whales.

The whale prediction maps and tool will be transitioned to the NOAA/NMFS SWR so that it can be used for marine spatial planning, informing management decisions, and the development of policies or regulations for protecting high-use areas.

It will also be made available on the NOAA website so that other marine users and stakeholders can use it to assess and reduce the risk of impact to Federally protected whale species. Right: Map of blue whale tracks color-coded by year they were satellite tagged. Image by Daniel Palacios.