Every year when the waters of the Chesapeake Bay drop below 54 degrees, blue crabs burrow under the sand to survive the winter. While the crabs are hibernating 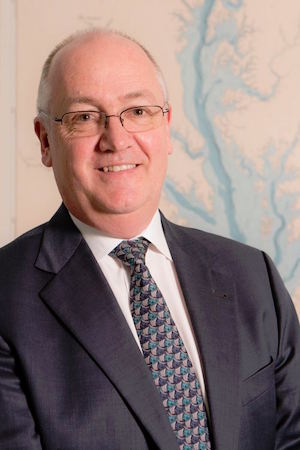 , scientists sample hundreds of sites across the Bay to estimates the size of the blue crab population. This information is used to set the annual blue crab harvest limits for all fisheries.

Dr. Tom Miller, director of UMCES Chesapeake Biological Laboratory, has been featured on Yale Climate Connections speaking about the warming waters of the Chesapeake Bay and the impact this may have on our ability to sustainably manage the region’s iconic blue crab population in the future.

“If we want to be able to manage that fishery so it’s sustainable, so that the next generation of fishermen can also catch crabs, it is important to know their abundance,” says Dr. Tom Miller in the interview.

However, the maintenance of the Chesapeake Bay’s fisheries and the crab population may become more difficult as the water warms. As water temperatures in the Bay rise, blue crabs may skip their winter dormancy and become active year round. By the turn of the century, estimates predict this change will happen. Without the normal burrowing of blue crabs it will make it very difficult for scientists to count crabs and estimate the population. Less reliable ways of estimating will have to be used until new methods are developed, making it easier for blue crabs to be overharvested.

Yale Climate Connections consists of 90-second stories about how people are responding to our warming world.