Brook Trout (Salvelinus fontinalis) are the only trout species native to the state of Maryland.  Brook Trout are the top predators in many coldwater streams but their range has been declining in Maryland, as well as elsewhere in the eastern US, due to their sensitivity to environmental disturbance.

Once widespread throughout Maryland west of the fall line, Brook Trout have been increasingly restricted to isolated headwater populations over the last 100 years.  Human-induced stressors to Brook Trout populations include:  land use change, climate change, and population fragmentation.  Climate change effects could be especially pronounced for Brook Trout because they are a coldwater species.  Climate change is expected to bring a warming of stream temperatures, as well as an expected increase in frequency of extreme weather events, like drought and floods.  The impacts of these stressors are expected to continue or worsen, making the future of the Brook Trout in Maryland uncertain.

Middle Fork of the Savage River near our study area under moderate flow.

In Maryland, Brook Trout are clustered in three areas, roughly corresponding to the Piedmont, Catoctin Mountains, and the Appalachian Plateau, where populations are most robust and the most likely to persist into the future based on climate change predictions.  The Savage River watershed within the Appalachian Plateau hosts relatively robust Brook Trout populations and represents a regionally important stronghold for Brook Trout.  A large portion of this watershed has been placed under special angling regulations, prohibiting the use of live bait or harvest of Brook Trout, which provides an excellent opportunity to follow large numbers of Brook Trout through space and time while evaluating the effectiveness of these special regulations.

The primary goal of this research was to forecast alternative futures for Brook Trout populations in Western Maryland by addressing the following key questions using a variety of tools:

The Savage River watershed on the Appalachian Plateau of western Maryland contains more than 100 km of interconnected coldwater streams and has been identified as an important stronghold for wild Brook Trout.  We primarily focused on the Big Run watershed within Savage River, which is almost entirely on public land.  Middle Fork, another tributary flowing directly into Savage River Reservoir served as a complimentary study area to boost our spatial coverage in the watershed and allow for comparisons among tributaries for certain aspects of our work.  The aquatic habitats are representative of many Brook Trout streams in the eastern portion of the species range.

Brook trout are a highly plastic and variable species whose life history, habitat use, movement patterns, morphology, and genetics may all vary markedly among and within populations.  In turn, growth and longevity in Brook Trout are also highly variable within and among populations, resulting in considerable differences in population size structure and reproductive output.  Because size and reproductive output are closely linked, growth rates have a strong influence on population dynamics.  This phase of our work focused on trying to identify factors that are important controls of growth in order to identify opportunities for managers to enhance wild trout populations.

We used tagging data from more than 2,200 individually marked fish within the study areas.  Fish were collected annually during early summer from 2010-2013 using three-pass backpack electrofishing surveys throughout each of the study sections within the Big Run watershed.  Fish were anesthetized and surgically implanted with a passive integrated transponder (PIT) tag.  Two stationary antennas were installed within the study area – one on Monroe Run approximately 50 m upstream of its confluence with Big Run (within section 4 on map) and the second at the upstream extent of our study area on Upper Big Run (within section 3 on map).  These efforts yielded 681 recapture events during 2011 and 2012.  Based on recaptures of individually marked fish, we characterized the physical movement, growth, and survival patterns of Brook Trout within the study area.  We described these movement patterns using both the mark-recapture observations and stationary PIT antennas, which would detect fish movements that would have otherwise gone undetected using only a mark-recapture study design.  We calculated annual growth increments for any individuals that were recaptured on consecutive summer electrofishing samples.  We then generated individual encounter histories for 2,973 fish representative of the two streams based on four years of electrofishing surveys.

Using the recapture data from both Big Run and Middle Fork watersheds, we quantified growth rates.  Our results show that size is a poor proxy for age and that many of the drivers of Brook Trout growth in these streams are uncontrollable.  Individual growth rates varied greatly among fish, ranging from 0 to 144 mm per year.  We also found substantial growth differences among years, resulting in some fish in their second year being as long as four-year-old fish.  We also found sex-specific differences in growth with males growing 10.5 mm per year faster on average than females and also documented significant growth differences among stream reaches, highlighting the importance of downstream areas for Brook Trout growth.  Our results suggest that population projections and management decisions based on a single year of data may be considerably different than those based on multiple years of data, which are required to capture the inherent variability within a population.  Projected increases in environmental variability will only increase the importance of longer-term datasets.

The following figure displays observed annual growth rates versus initial length for two years. Growth rates generally slowed with individual size, but were markedly faster during the second year of the study:

In order to manage populations, we need to know how they are structured.  Streams are highly dynamic linear environments with limited connectivity between adjacent watersheds.  Thus, heterogeneity in stream networks is expected to contribute strongly to population structure.  Individuals that occupy spatially contiguous habitat within a stream network are typically assumed to represent a single population but this assumption is generally untested.  As an extension of our large-scale tagging study, we collected adipose fin biopsies from 250 Brook Trout across the study area for genetic analysis.  Individuals were selected using a stratified random sampling design where about 50 individuals were chosen from each of five stream reaches, representing a mixture of mobile and stationary individuals.  Brook Trout were genotyped at 13 microsatellite loci.  Various population genetics tools were to analyze the genotyping results and characterize the physical movement, growth, and survival patterns of Brook Trout.

Based on the microsatellite data, the Brook Trout within the Big Run watershed appear to form two genetically distinct groups inhabiting adjacent and connected streams.  The movement patterns exhibited by these groups appear to limit the potential for genetic exchange between streams.  Exchange occurs between the two streams but it is limited despite the absence of barriers to physical movement.  Mark-recapture and stationary PIT antenna records demonstrated that fish from two tributaries of Big Run very seldom moved into the opposite tributary, but movements between the tributaries and mainstem were more common.  We identified two genetic groups using Bayesian genetic clustering with similar survival rates that exhibited significantly different growth rates over the three years of study.  Inferred membership of individuals in two genetic clusters clearly reflected the geographic layout of the stream network, with Monroe Run fish consistently assigned to one group while Big Run fish upstream of the confluence with Monroe Run were consistently assigned to another.  Downstream of the confluence of Monroe and Big Run (Lower Big Run), individuals were predominantly of Big Run origin.  These results highlight the importance of considering the possibility of multiple genetically distinct populations occurring within spatially contiguous habitants, and suggest the existence of cryptic metapopulations: a spatially continuous distribution of organisms exhibiting metapopulation-like behaviors.  An improved understanding of this hidden level of population organization may help to improve management and restoration outcomes.

The following figure presents individual assignment probabilities for individuals in five stream sections based on two clusters for Brook Trout in the Big Run watershed. 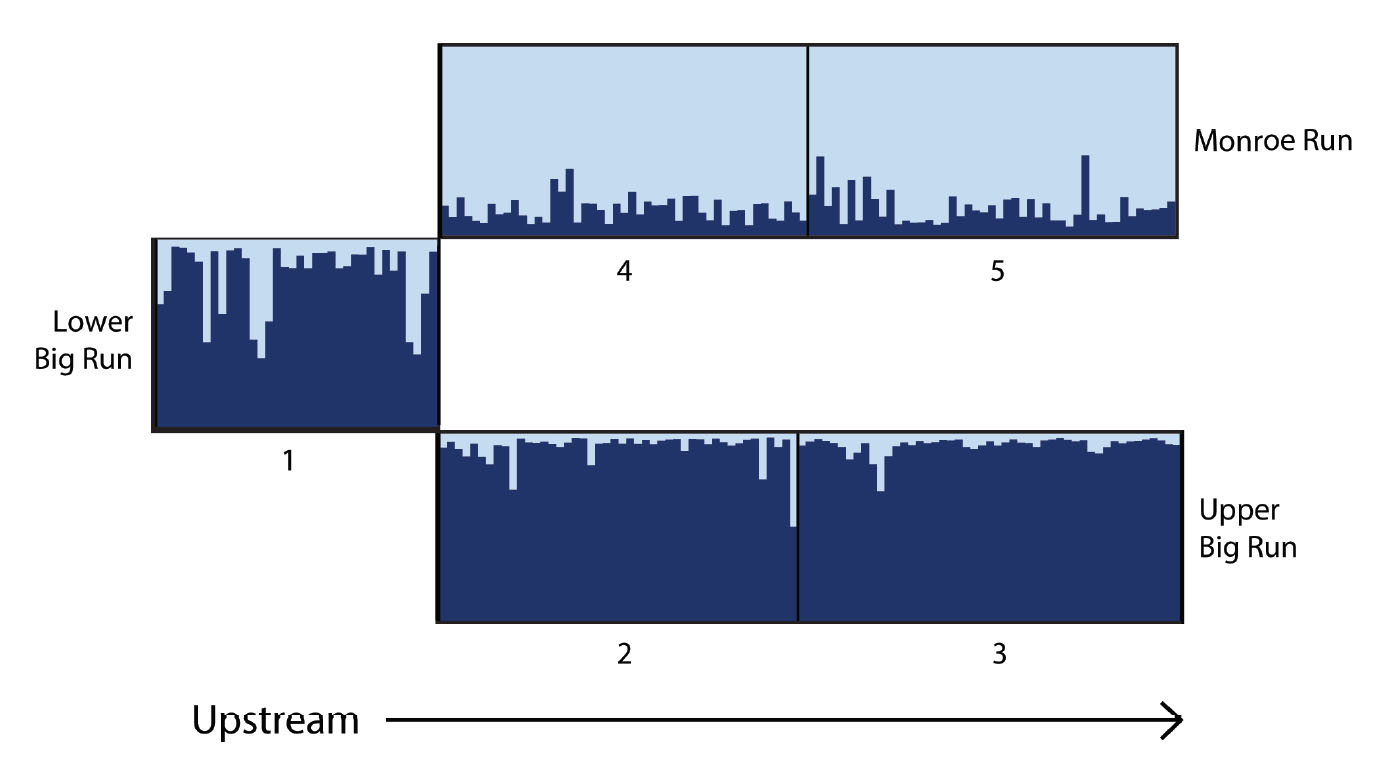 Environmental change is a ubiquitous force driving the population dynamics fish and wildlife populations.  The vital rates of populations commonly vary in response to environmental conditions, which are predicted to rapidly change during the next century.  Although the causes of environmental change are outside the traditional scope of fisheries management, managers may be able to mitigate some of the impacts of climate change using established regulatory approaches.  With this in mind, alternative futures were forecasted for wild Brook Trout populations within the upper Savage River.  We used two data sources to characterize the population dynamics:  (1) a long-term monitoring effort commenced in 2006 with census data from a network of sites across the upper Savage River watershed and (2) the intensive mark-recapture described above on a single stream, Big Run.  We used the field observations to parameterize stochastic stage-based matrix population models representing current and alternative conditions.  We considered four different growth and four different survival scenarios.  Population persistence was evaluated in each of the 16 scenarios by comparing the probability a simulated population would be extinct within 50 years, using the abundance of Brook Trout observed in 2014 as an initial population.

The following graph illustrates the cumulative probability of recovery for simulated Brook Trout populations under four different growth regimes. Each line represents a specific survival scenario and is distinguished by a unique dash pattern. 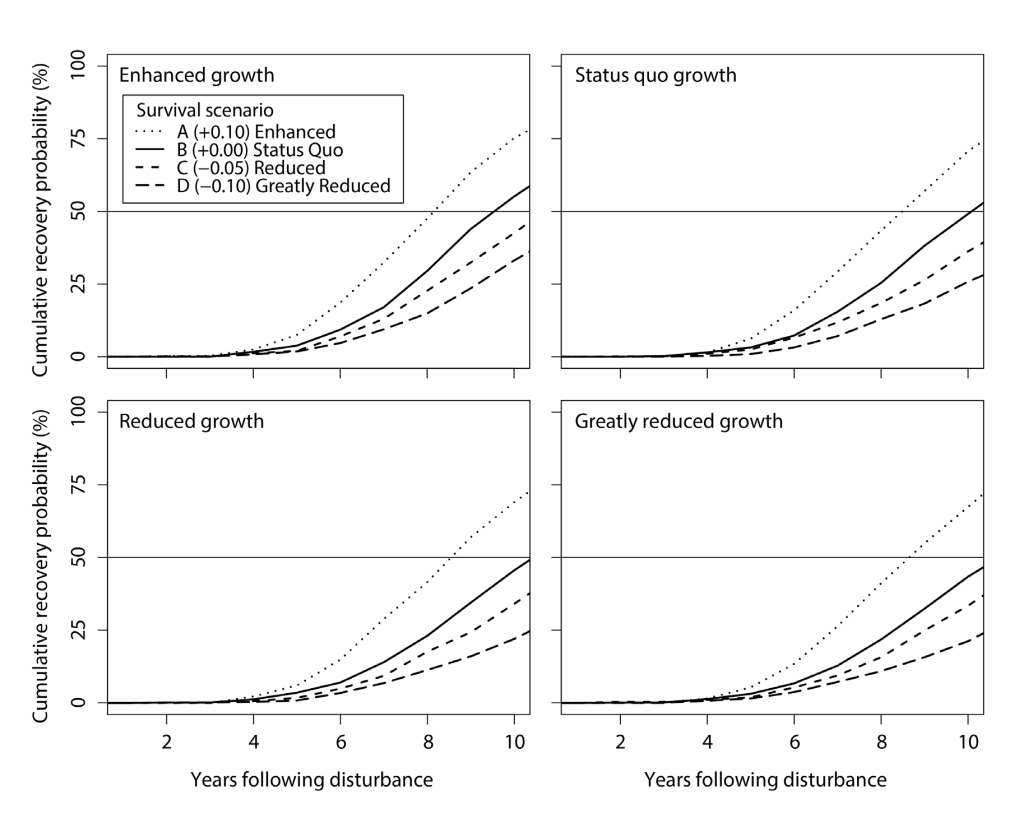 A comparison of the reproductive value of small, medium, and large Brook Trout under an array of different survival and growth strategies.

The average relative reproductive value for each stage also varied across the different scenarios.  Under conditions of decreased growth and survival, large Brook trout are the most valuable with medium-sized individuals also of enhanced value.

Our study suggests fishing regulations may have some utility to promote population resilience in western Maryland.  It also suggests that the aspects of Brook Trout ecology we examined are naturally somewhat resilient to environmental change.  Where environmental change significantly jeopardizes Brook Trout, regulatory measures alone are unlikely to be adequate to conserve wild populations.  Collectively, these results suggest regulatory approaches may offer some utility in promoting population resilience while enhancing the quality of the fishery, but are likely insufficient to fully offset the impacts of predicted environmental changes.

These tools have been used to improve our understanding of the structure and function of Brook Trout populations in western Maryland in a variety of different areas.

These results have important implications for conservation and management of Brook Trout.  First, contiguous patches of habitat that are typically used to delineate populations may not adequately capture the underlying biological structures and diversity.  Undetected populations can represent unique genetic groups with potentially important local adaptation and warrant conservation.  Additionally, some of our populations may be much smaller and therefore more vulnerable than previously thought.  Large interconnected watersheds should not be assumed to represent a single, robust population.

Although it is not practical to individually manage, or even document, all populations across the species range, a basic recognition of the underlying biological complexity found in Brook Trout populations may help identify management strategies to conserve them.  Reintroduction programs should exercise special caution when sourcing their fish, as even fish collected in the same watershed may not be of the same population.  If this occurs, translocated fish may remain reproductively isolated even when occurring in sympatry.

Additional management considerations highlighted by this work suggest that range-wide or even regional generalizations may fail to capture important differences among populations, and these differences may have important implications for the way we manage wild fisheries.  Prior to this study, it was expected that Brook Trout in the upper Savage River watershed grow rapidly and seldom live past three years of age.  While this is partially true, it fails to reflect the tremendous amount of interannual variability in growth rates or to consider the presence of very large, old individuals that were observed in the mark-recapture component of our work.  Consequently, management strategies that assume fast growth and rapid turnover may fail to protect large, highly fecund individuals that play a disproportionate role in sustaining populations through periods of low recruitment.