After years of studying dolphins and their movements, Helen Bailey, a scientist at the University of Maryland Center for Environmental Science's Chesapeake Biological Laboratory, wanted to take her research to a new level.

She had anecdotal evidence that dolphins were visiting Chesapeake Bay in the summer months, but little information about why they were there, and even less knowledge about when and where. Earlier this summer, she oversaw the launch of a web-based application to kick-off Chesapeake DolphinWatch, a citizen science-driven project aimed at helping her find some answers.

The app, which is free to use, invites the general public to report dolphins they see in the Bay by touching the location on a map. Within the first month of the launch, more than 1,300 users registered to use the Chesapeake DolphinWatch app and reported roughly 700 sightings. Bailey and her team are working to individually verify each sighting.

To hear more from Bailey, listen to the episode above. You can also read the full transcript. 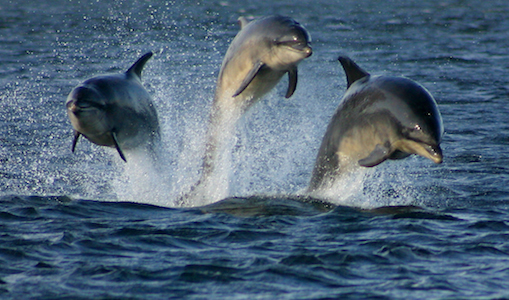 My name is Helen Bailey and I’m a research associate professor at the Chesapeake Biological Laboratory, part of the University of Maryland Center for Environmental Science.

I started the Chesapeake DolphinWatch Project because we had received anecdotal sightings of dolphins in the Bay and we had been talking to other scientists. The Chesapeake Biological Lab is based up on the Patuxent River and we started testing our hydrophones off the pier just as part of our offshore project, just making sure our listening devices for dolphins were working properly before we deployed them at sea.

We thought that there might be rare occurrences of dolphins coming into the river, but actually we found that these listening devices were picking them up regularly during the summer months. So we realized instead of just being occasional visitors to the Bay, they were actually quite frequent visitors to the Bay and we wanted to find out when the dolphins are coming here – where, when and how and why are they doing this. Why are they coming into the Bay?

We wanted to find out where the dolphins were going in the Chesapeake Bay, but the Chesapeake Bay is a really big and complicated place because there are so many rivers and tributaries. So it’s really hard to survey the whole of that area, even if we’re doing aerial surveys from a plane, and certainly we would need hundreds of listening devices in order to cover that area.

So what we really need is as many eyes on the Bay as possible so we can find out where the dolphins are going and we thought that citizen science could really play an important role because most people know what a dolphin looks like. We know the main species that’s occurring in the Bay is the bottlenose dolphin so we don’t have confusion about what type of animal they’re seeing – if they’re seeing a dolphin, it’s most likely a bottlenose dolphin. And people can easily spot them. They’re usually fairly close to land, and often they’ll do behaviors like leaping in the air. They can be quite social animals. So our hope was with all these people looking out on the water for dolphins we’d be able to get a much better picture of where they’re occurring in the Bay.

We created this online tracker so people could easily report their sightings, but also they could see other people’s sightings so they could find out where dolphins have been seen. We’ve been amazed at how many people have been using the app and reporting dolphin sightings. Within the first month, we have over 1,300 users and 700 reported sightings, which is much greater than we anticipated.

When people use the online tracker, the information that is requested is part of the sighting reporting is date and time, and then also the group size. There’s different group size categories that may come up indicating the group size of the dolphins they saw. And then the latitude and longitude comes directly from your mobile device. So we get date, time, latitude/longitude and group size and also the email address of the person who reported it.

Once we receive a sighting, that sighting is immediately shown on the app, so anyone on the app can see that person’s sighting. We have a database that we can view with all of the sightings and we will contact the person who reported each sighting asking them if they can provide a bit more information, particularly if that person has a photo or video, that allows us to very quickly verify that there were dolphins, but any additional information that helps convince us that yes, it was definitely a dolphin, it wasn’t just a wave or something else splashing in the water. Usually people will be able to quite quickly provide additional information that makes it very clear, that it was indeed a dolphin sighting, or they can say I just pressed the button by mistake and then we can just delete it.

So we can see where the dolphins are occurring and when, so we can start to get a better idea of where can should focus our efforts for the aerial surveys and where to put these listening devices as we begin to understand a bit better where these dolphins are going. Although what we’ve been finding is that actually dolphins go in many places around the Bay. We haven’t found just one hot spot. They actually go as far north as the Bay Bridge and beyond. They go on the east and west sides of the Bay. They will go right up the rivers. We had a sighting one 30 miles up the York River. So they’re quite widely distributed, and it’s been really interesting to learn more about this and we certainly hope that now that we’re starting to collect this data, we can then also look how that not varies just over one season, but also year to year as well.

What’s really important here is also that bottlenose dolphins can sort of be an indicator of the ecosystem. They’re something that’s easy to spot and they’re going to be most likely coming into the Bay because they’re following food, they’re following fish. So we’re also going to try to get a better understanding of how fish movements are influencing the occurrence of dolphins into the Bay as well.

I’ve just been astounded how many are up further north: Annapolis, around the bridge, all around there. I didn’t think they’d be quite such frequent visitors. Because the fact that we had a lot of sightings in the Potomac and then less in the Patuxent, I was sort of expecting that it would gradually decrease the further north you went. So I’m really interested as the season goes back down – obviously we missed the beginning of the season because we didn’t start until June. So at the end of June we were already like into peak time and they’re just everywhere and it’ll be interesting as the summer winds down, if we see those sightings retreat further and further south.

From our listening devices it does seem like there have been more dolphin occurrence this year than last year, but the other thing is, is it that the Bay is healthier or is it that along the coast there is not as much food? That’s a potential risk. Our hope is that it is because the Bay is healthier, but what we’re also going to look at is dolphin movements along the coast, too, off Maryland and hopefully Virginia, too, with our collaborators at Cornell so we can see how much occurrence is there relative to in the Bay, so if there is a shift are the animals just moving in because it’s just not good anymore out there versus are there just generally more dolphins around.

I expect that we’ll probably receive sightings into September and possibly into October, and then our plan is to do some improvements to the app and make it a mobile app, so it’s not just online, but there’s an app you can download. We’ll do that over the winter so there will be improvements to it for the next season April of next year. April to October is the main dolphin season and at the moment, we had funding just for the first year, so we’re going to be looking for more funding to continue this work in the future.

My hope is that this can continue in the future with no specific end date. Having set this up, it’s easy for people to report and we can just download it as an Excel spreadsheet. It’s very easy for us to access and analyze so the hope is that this is a low cost way of getting information on the dolphins, which will allow it to continue regardless of what other funding we manage to get. Obviously the listening devices cost money so that we do need to raise money for, but the public sightings is relatively low cost. We just have to keep the app going and we can collect data and continue to look at it in the future.

I think one of the interesting things we’re finding from our listening devices in the Potomac and Patuxent River where we have them at the mouth, they move through the area relatively quickly, so it looks like they are moving up the river to feed, so we’d like to place them further up the river to find out where they are feeding because based on the echolocation clicks they’re producing we can tell as they’re approaching a prey item and actually feeding – we call it a feeding buzz. So we can identify when they’re feeding and what we’d like to do is find some of those places. Ideally, at least as a start, it would be wonderful to have 10 of those devices so we can place them in a couple of the rivers and try and study those in more detail.

It’s been really exciting. I did a talk at CBL Visitor Center last week and I was actually doing the talk on my turtle project and I was amazed how many people asked me about our DolphinWatch tracker because they had been using it or heard about it from a friend and people were really, really excited. I think dolphins are something that just resonate with a lot of people. They’re wonderful animals to watch. They’re so fascinating and I think that people are often surprised at how frequently they can see them in the Bay and so finding that out and realizing, oh, if I’m standing on shore or going out on a boat, I should keep a lookout for these animals because they might actually be here.

The other response we’ve had is sometimes people have said, ‘Oh yeah, I’ve been seeing dolphins regularly. We just didn’t know to report it.’ So that’s also been interesting and we’re obviously following up with how long have you been seeing the dolphins, and when do you usually see them just to get a sense of what they thought was normal because obviously what would be interesting, as we collect this data is what’s the average occurrence and how much does that vary if we have a very warm year or a cooler year, how does that change, or if we have a sudden change in fish. It’s been really fascinating and I think everyone’s been extremely supportive.

Thousands of Marylanders with their eyes on the water have helped scientists understand when bottlenose dolphins are visiting the Chesapeake Bay.

Isabel C. Sánchez-Viruet is studying the potential of floating wetlands to remove nitrogen from tidal waters.