Your vote counts! Click here for resources on how and where you can vote in the upcoming election. 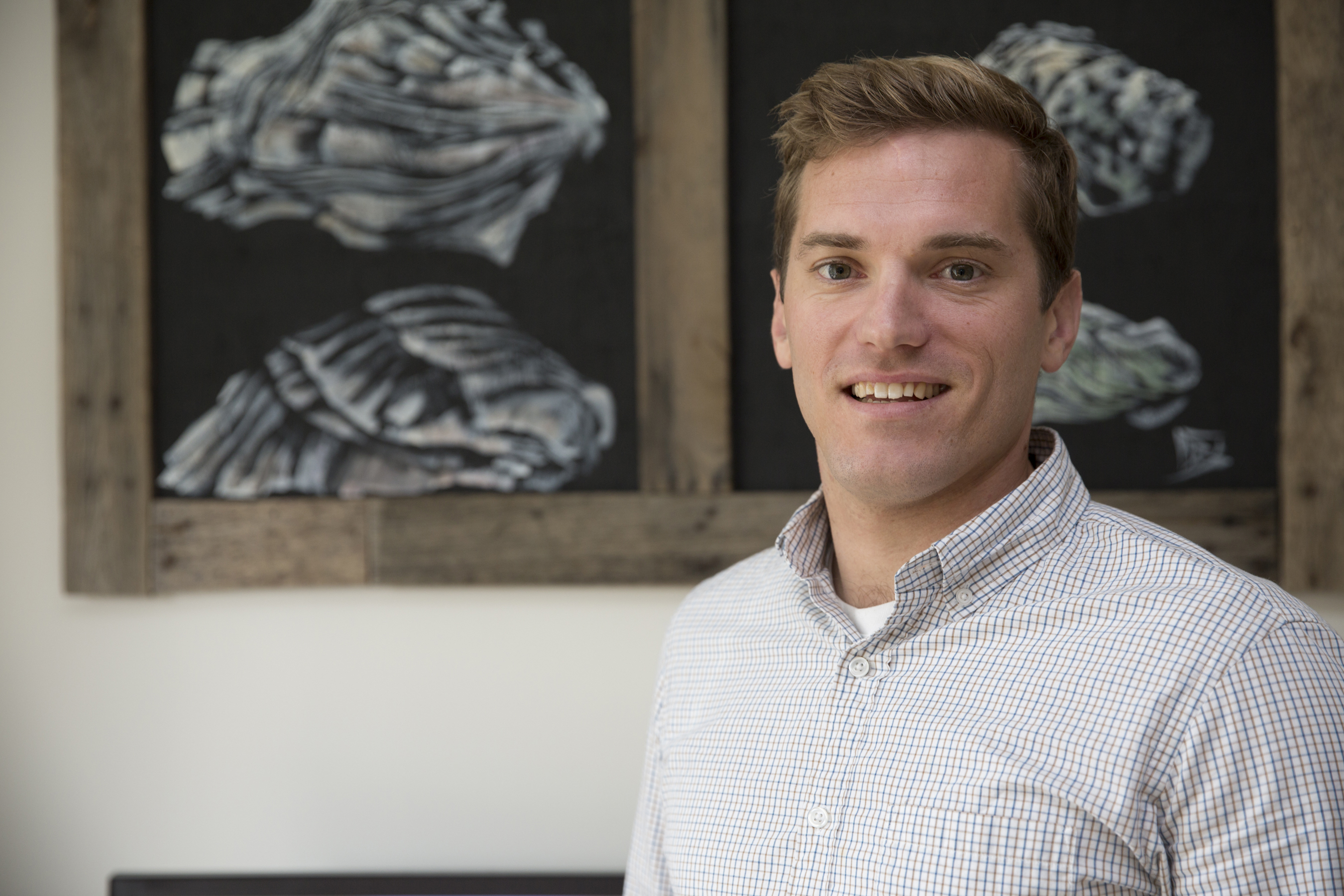 Where did you grow up?
I'm from Bucks County, Pennsylvania, very close to the Delaware River.

When did you first arrive at Horn Point?
In the fall of 2017 after doing my post-doc at the University of Maine at the Darling Marine Center.

Tell me about your research.
I'm really interested in the different services that shellfish provide. The most obvious service is as food. We grow them and eat them. Other uses include shoreline stabilization and as habitats for other commercial and ecologically important species. Then there's other services that people are probably more familiar with, such as water filtration and improvement to the clarity and quality of waterways.

I want to provide really honest expectations as to what shellfish can provide for an ecosystem. I’m more of a hardcore biologist than ecologist, so to answer some of those complicated questions I collaborate with others—geomorphologists and mathematicians, etc.—so many of my projects are research papers with many names on them because I can't specialize in everything.

Where has your research taken you?
I’ve traveled to Hawaii, Italy, Brazil, and Chile, all of which were related to oyster aquaculture research and collaborations. That's been really nice because I love traveling and experiencing different places.

Chile was the most recent trip working with Oscar Chaparro, who has a special brooding process for oysters. Most of the oysters that we know in the States have been what is known as broadcast spawn, meaning we put sperm and egg in the water and fertilization occurs in the water, then there’s larvae which go to setting and eventually become adult oysters.

But there’s another whole reproductive mode in certain oysters where the female inhales the sperm and incubates the eggs internally, in a brood chamber, but we don’t have a really good understanding of the conditions in those brood chambers. What’s really interesting is that it appears that these brooding species are more resistant to ocean acidification. So, we may end up having some winners and losers among species of oysters in the future as they’re forced to deal with ocean acidification and climate change-related factors.

When did you first realize that you wanted to pursue a career in the sciences?
I was very interested in science, biology, and medicine early on. My mom is a veterinarian, so I would go with her to the clinic and she would put an x-ray up of a dog and say, “So what’s wrong this dog?” and we’d talk about it, and I thought that was so cool. So for the longest time I thought I would become a radiologist. Cut to college, and I learned that you could be a doctor but also study the environment and not have to live your life inside the hospital. Right around that time I also learned how to surf and then I was like, “Okay, well now I know I want to be coastal for the rest of my life,” so I started heading in this marine direction.

What were some of your favorite classes in school?
I loved physics, and I suppose I really liked all the sciences but I was not the best student, to be honest. Academically, I matured in college. That’s when I learned how I learned, if you will. I cracked the code, and my grades really started improving. So for any students who are reading this, please know that just because you haven't peaked in high school doesn't mean you cannot become a better student.

Do you have a research and/or student-related story that’s especially memorable?
When I was a Ph.D. student, I had several REU (Research Experiences for Undergraduates) students. My first advisee was a hard worker, super smart, and got things done. The data she generated was so good that we knew we wanted to publish it. We’ve kept in touch over the years, and now she's just been hired as a professor in Florida, and I'm so happy for her because it's her dream job.

Now, we're for the first time in about 10 years going to work on publishing her data that we collected together when she was my REU. So she was amazing, but she has credited me as helping to steer her path towards research and being part of the reason why she ended up where she is now. It’s hard for me to believe, but just very touching.

University of Maryland Center for Environmental Science (UMCES) Professor Emeritus Michael Kemp, a pioneering ecosystems ecologist and world leader in conducting research on the ecology of estuaries, has passed away after a courageous battle with Parkinson’s disease.

Tom Malone on understanding nutrient pollution in the world’s oceans

As a biological oceanographer, Professor Emeritus Tom Malone has focused his recent research on building the requirements for the coastal component of the Global Ocean Observing System, a global system of sustained observations in the world’s oceans to assess the health of the ocean and document the

A recent paper by University of Maryland Center for Environmental Science phytoplankton ecologist Pat Glibert sheds light on the impacts of both crop and animal industrial farming in the United States on nutrient pollution.