ANNAPOLIS, MD (May 17, 2016)—The overall health of Chesapeake Bay improved in 2015, according to scientists at the University of Maryland Center for Environmental Science. The largest estuary in the nation scored a C (53%) in 2015, one of the three highest scores since 1986. Only 1992 and 2002 scored as high or higher, both years of major sustained droughts.

“We’d expect to see improvements after a drought year because nutrients aren’t being washed into the Bay, fueling algae blooms and poor water quality,” said Bill Dennison, Vice President for Science Applications at the University of Maryland Center for Environmental Science. “However, in 2015 stream flow was below normal, but nowhere near the drought conditions in 1992 and 2002. Thus, the high score for 2015 indicates that we’re making progress reducing what’s coming off the land.” 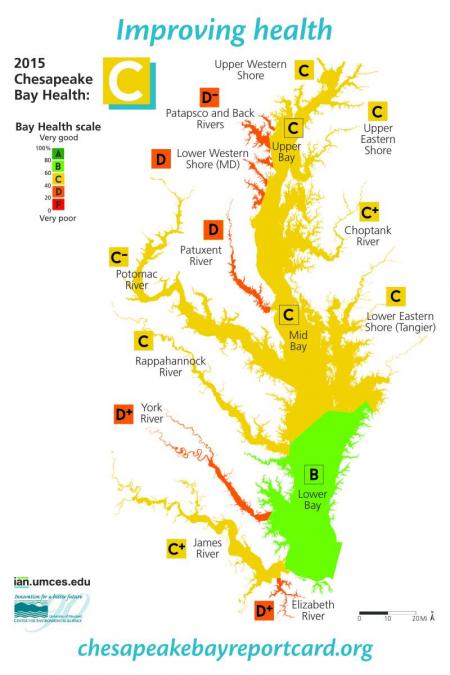 The overall score for the Chesapeake Bay Health Index for 2015 was 53%, compared with 50% in 2014 and 45% in 2013. There were strong improvements in many regions throughout the Bay, such as the Choptank River, Upper Eastern Shore, Lower Western Shore, and the Rappahannock River. There were no regions that had lower scores in 2015 compared to 2014. Improvements could be related to a number of factors, including several years of moderate weather, sewage treatment upgrades, use of winter cover crops by farmers, and reductions in atmospheric nitrogen deposition.

"We know why the Bay became degraded and what we need to do to restore it. This report card shows what's possible when we take action," said Donald Boesch, president of the University of Maryland Center for Environmental Science. "The positive results give us confidence that even greater improvements will be realized if pollutant loads are further reduced as committed."

Most of the indicators comprising the Chesapeake Bay health index improved in 2015. Chlorophyll a—a measure of phytoplankton concentration, which can lead to reduced water clarity and reduced dissolved oxygen levels— had improving scores throughout the Bay. Improvements in water quality contributed to the resurgence in aquatic grasses, one of the most important habitats in the Chesapeake Bay, providing a home for key species such as blue crab and striped bass.

Total nitrogen levels continued to improve throughout the Bay, corresponding to reductions in nitrogen entering the Bay being measured at monitoring stations. Dissolved oxygen—the amount of oxygen

available in the water for the Bay’s creatures to survive—remained steady, while the benthic index of biotic integrity—what’s happening to life on the bottom of the Bay—showed improvement.

"The Hogan Administration applauds the hard work of the University of Maryland Center for Environmental Science and the positive news of the Chesapeake Bay report card," said Maryland Department of the Environment Secretary Ben Grumbles. "Marylanders are helping to protect the land, water, air, and natural resources and that's leading to a healthier Bay for all. We will make even more progress if we continue to innovate and partner with all sectors within the watershed, from agriculture to energy and transportation, and from the Conowingo Dam to the streams, wetlands, and aquifers that help define our national treasure."

The one indicator that declined was total phosphorus, which had a lower score from the previous year. Excess phosphorus can lead to algae blooms, which reduce the amount of oxygen in the water available for Bay organisms.

Striped bass, bay anchovy and blue crab are ecologically, economically and socially important fish species in the Chesapeake Bay. While the Fisheries Index (an average of all three species’ scores) is variable over time, it increased from 67% in 2014 to a 73% in 2015, which is a moderately good score. Striped bass held steady with a 98% score while both blue crab (47%) and bay anchovy (73%) improved. Bay anchovy are the most abundant schooling fishes in the Bay, providing an important food source for top predators, like striped bass. Fisheries indicators can have large variation from year to year since these species move throughout the Bay and are highly managed.

"The information being released today by the University of Maryland Center for Environmental Science is very positive and consistent with the trends the Chesapeake Bay Program has been witnessing over the past few years,” said Nick DiPasquale, director of the Chesapeake Bay Program Office. “We should take the opportunity to celebrate these results, but we should also recognize that the long term success of our work to restore water quality and the health of this vitally important ecosystem will depend on stepping up and sustaining our efforts over the long-term to reduce nutrient and sediment pollution discharges to streams and rivers throughout the watershed."

The University of Maryland Center for Environmental Science’s Integration and Application Network produces several annual report cards to assess the health of Chesapeake Bay waterways to enhance and support the science, management and restoration of Chesapeake Bay. For more information about the 2015 Chesapeake Bay Report Card including region-specific data and downloadable graphics, visit chesapeakebay.ecoreportcard.org.

For 90 years, the University of Maryland Center for Environmental Science has led the way toward better management of Maryland’s natural resources and the protection and restoration of the Chesapeake Bay. From a network laboratories located across the state, UMCES scientists provide sound advice to help state and national leaders manage the environment, and prepare future scientists to meet the global challenges of the 21st century.