CAMBRIDGE, MD (September 2, 2014)—The Susquehanna Flats, a large bed of underwater grasses near the mouth of the Susquehanna River, virtually disappeared from the upper Chesapeake Bay after Tropical Storm Agnes more than 40 years ago. However, the grasses mysteriously began to come back in the early 2000s. Today, the bed is one of the biggest and healthiest in the Bay, spanning some 20 square miles. A new study by scientists at the University of Maryland Center for Environmental Science's Horn Point Laboratory explores what’s behind this major comeback. 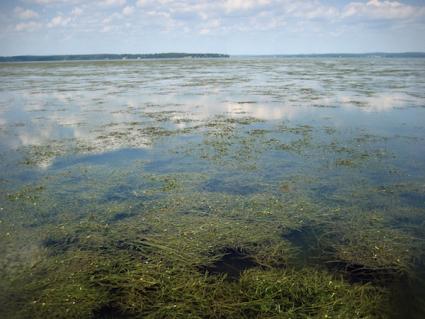 “This is a story about resilience,” said Don Boesch, president of the University of Maryland Center for Environmental Science. “It’s a powerful example of how organisms in ecosystems once given a chance can make themselves resistant to stresses and changes.”

Underwater grasses are important to the Bay because they provide habitat for juvenile fish and enhance water clarity by trapping and removing sediment from the water. Historically extolled by trophy fisherman and waterfowl enthusiasts as prime wildlife habitat, researchers believe that the underwater grass beds at the shallow Susquehanna Flats began to decline in the 1960s when polluted runoff from a rapidly developing watershed overwhelmed the Bay’s waters with nutrients, causing algae blooms that blocked out much-needed sunlight for underwater plants.

“Underwater grasses are sensitive to water quality so they are a direct indicator of the Bay’s health,” said lead-author Cassie Gurbisz of the Center’s Horn Point Laboratory. “The fact that they came back means something good is happening. It’s important, however, for us to understand how they came back so we can use that information to support restoration in other areas.” 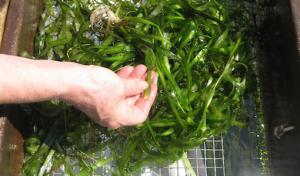 With SAV already stressed by nutrient pollution, it was Tropical Storm Agnes in 1972—a three-day weather event in June that dumped up to 19 inches of rain on the region and an estimated 30 million tons of sediment into the Chesapeake Bay—that was the final blow that destroyed the bed. A torrent of polluted floodwaters and sediment overwhelmed the beds, and the submerged plants virtually disappeared for nearly three decades. That is until the early 2000s when the underwater grasses, also called submerged aquatic vegetation (SAV), rapidly recolonized nearly the entire region.

“This was a large and abrupt resurgence. The Susquehanna Flats SAV bed is gigantic--the largest in the Chesapeake, with multiple species of grasses,” said Professor Michael Kemp. “When you’re out on the Flats in summer at low tide, you see these plants at the water surface all around you, and it’s a truly awe inspiring scene.”

It was clear that the extreme flood event following Tropical Storm Agnes triggered the historic demise of the grasses at Susquehanna Flats, however the extended absence of SAV for over 30 years—and the rapid comeback in the last decade—was puzzling to scientists. Researchers analyzed recent and historical data to try to develop a model that explains this resurgence. Monitoring programs throughout the years provided a wealth of information on underwater grasses (since 1958), water quality (since 1984) and even climate-related variables, such as temperature and rivers discharge dating back to the late 1800s. 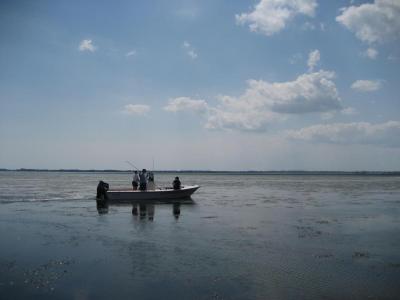 Researchers found that modest reductions in nutrient pollution to the Bay beginning in the late 1980s had led to long-term improvements to water clarity and the amount of light available for plants to grow underwater. A dry period from 1997-2002 combined with the absence of major storm events provided ideal conditions for new plant growth, and a critical threshold for the amount of light reaching the plants was crossed. As a result, the bed began to expand and colonize deeper water.

“Exceptional growing conditions during the drought period allowed the system to overcome turbid water and served to kick start a rapid resurgence,” said Gurbisz. “Light availability is the most important factor in the growth of submersed plants.”

Then the plants took over with a process called positive feedback. That is, once given a chance, grass beds can improve their own growing conditions by helping sediment drop to the bottom and stay there (increasing the amount of sunlight that can reach their leaves), and using excess nutrients in the water to grow. The researchers found lower nitrogen concentrations and less turbidity in the grass beds than the surrounding waters.

These feedbacks also affect a plant bed’s resilience, or its ability to resist disturbances such as storms and rebound after they pass. The researchers note that in the decade before Tropical Storm Agnes, the bed was deteriorating. As a result, feedbacks were not very strong and the bed was unable to stand up to Agnes. The present bed is, evidently, more resilient. When major floodwaters flowed from the Susquehanna River in Fall 2011, a portion of the bed was lost. However, the remaining bed has continued to thrive and expand.

“These processes and patterns are not unique to Susquehanna Flats. Similar trends have been suggested for the Mid-Atlantic Coastal Bays and Northern Europe alike,” said Kemp. “Our broader motivation lies in the idea that the methods and models used here can be applied elsewhere to explore similar plant bed dynamics around the world.”

The paper, “Unexpected resurgence of a large submersed plant bed in Chesapeake Bay: Analysis of time series data,” by Gurbisz and Kemp of the University of Maryland Center for Environmental Science’s Horn Point Laboratory, was published in the March 2014 issue of Limnology and Oceanography.

The University of Maryland Center for Environmental Science unleashes the power of science to transform the way society understands and manages the environment. By conducting cutting-edge research into today's most pressing environmental problems, we are developing new ideas to help guide our state, nation, and world toward a more environmentally sustainable future through five research centers—the Appalachian Laboratory in Frostburg, the Chesapeake Biological Laboratory in Solomons, the Horn Point Laboratory in Cambridge, the Institute of Marine and Environmental Technology in Baltimore, and the Maryland Sea Grant College in College Park. www.umces.edu