The Chesapeake Biological Laboratory is comprised of several buildings located at the southern tip of Solomons Island. Learn more about our campus. 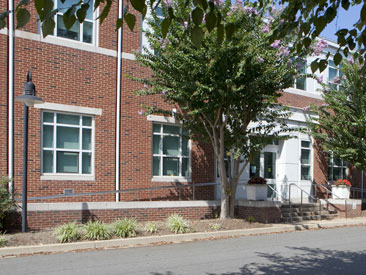 This laboratory was built in 1994 and re-dedicated in 1998 to honor former Maryland State Senator C. Bernard “Bernie” Fowler for his efforts to protect the Chesapeake Bay watershed. He is particularly known for his annual “wade-in” in the Patuxent River.

Research laboratories for environmental chemistry and toxicology are housed in this building. Researchers in these laboratories trace the abundance of natural and man-made chemicals throughout the environment and their effects on aquatic animals. 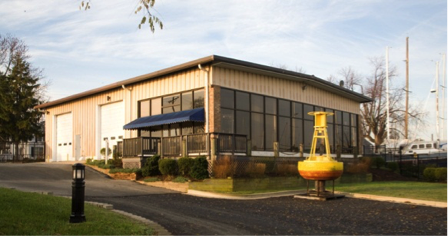 The Coastal Technologies building was a former marine dealership prior to CBL purchasing the property in 2000. 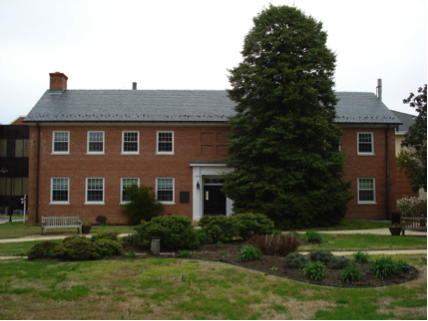 The Cory Research Laboratory was built in 1960 and re-dedicated in 1992 in honor of Dr. Ernest Cory (1887-1979), a respected entomologist who headed the University of Maryland's Entomology Department for more than 40 years. Dr. Cory also directed the State of Maryland’s Agricultural Extension Service for nearly two decades and was influential in planning and developing what would later become the Chesapeake Biological Laboratory. CBL's founder & first director, Dr. R.V. Truitt, was a student of Dr. Cory's at College Park, and was encouraged by his mentor to pursue oyster research.

Researchers working in this building measure and monitor water quality. They are responsible for measuring levels of carbon, nitrogen, and phosphorus from water samples from the Chesapeake Bay and from around the world, including Antarctica and the southeast Pacific. 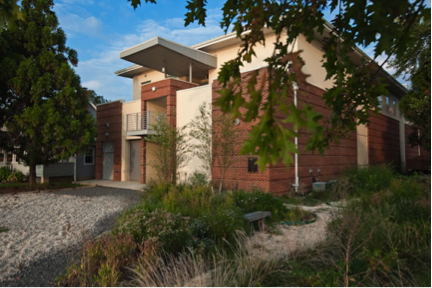 Built in 2007 and re-dedicated in 2013 to honor Dr. L. Eugene Cronin (1907-1998), CBL’s second director, the L. Eugene Cronin Complex, formerly known as the Fisheries Research Complex, houses CBL's seawater system and contains facilities for the culture and maintenance of estuarine organisms. The laboratories are utilized for ecological, behavioral, and toxicological studies on fish and invertebrates.

Running seawater laboratories supplied with flowing, temperature-controlled seawater from the Patuxent River via the Pump House on the pier are available throughout this building. The Cronin Complex also offers chemistry laboratories and walk-in environmental chambers, as well as the offices of several faculty and students.

Also located here is the Rain Garden, a planted depression that enables absorption of rain water runoff from the campus impervious areas, like roofs, walkways, parking lots, and compacted lawn areas, and the Cronin Seawater Pad. Large tanks outside of the Cronin Complex allow scientists to replicate experiments under more natural conditions (fluctuating water temperatures, varying amounts of sunlight, cloudiness, rainfall, etc.). Some tanks have been used to grow submerged aquatic vegetation and to rear juvenile fish, young sturgeon, striped bass, etc. They are protected by netting to prevent grabbing by the ever-present osprey circling overhead.

Built in 1980 and dedicated in 1992 to honor Dr. Romeo Mansueti (1923-1963), a former CBL fishery scientist, naturalist, and biological illustrator, this building is home to the ecology group that studies interactions among freshwater and estuarine ecosystems to improve efforts to restore the Chesapeake Bay and its tributaries.

Built in 2001, the Research Fleet Operations Center is home to UMCES flagship research vessel Rachel Carson and several smaller vessels. This is the former site of the landing for steamboats built in 1866 at Isaac Solomon’s oyster packing plant and, in 1890, the Solomons Steamboat Wharf. The UMCES Research Fleet is the backbone of the Center’s coastal science research programs, providing scientists with access to the Chesapeake Bay and its rivers. 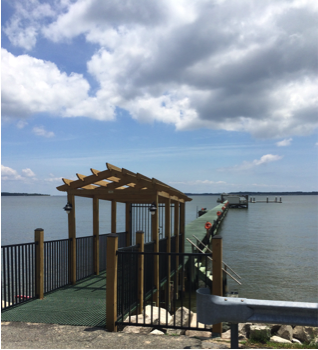 The first research pier was built in the 1930s and has been replaced several times, most recently in 2012. Over the history of CBL, students have spent time on the pier learning about Chesapeake Bay organisms, and scientists have measured the temperature and salinity of the water from its pilings since 1938. The pier is used for various research instrumentation, monitoring equipment and a NOAA weather station.

The Pump House at end of pier is the intake for the CBL Seawater System that provides continuously re-circulating Bay water to outdoor experimental tanks and indoor laboratories in the L. Eugene Cronin Complex and the R.V. Truitt Laboratory Building. 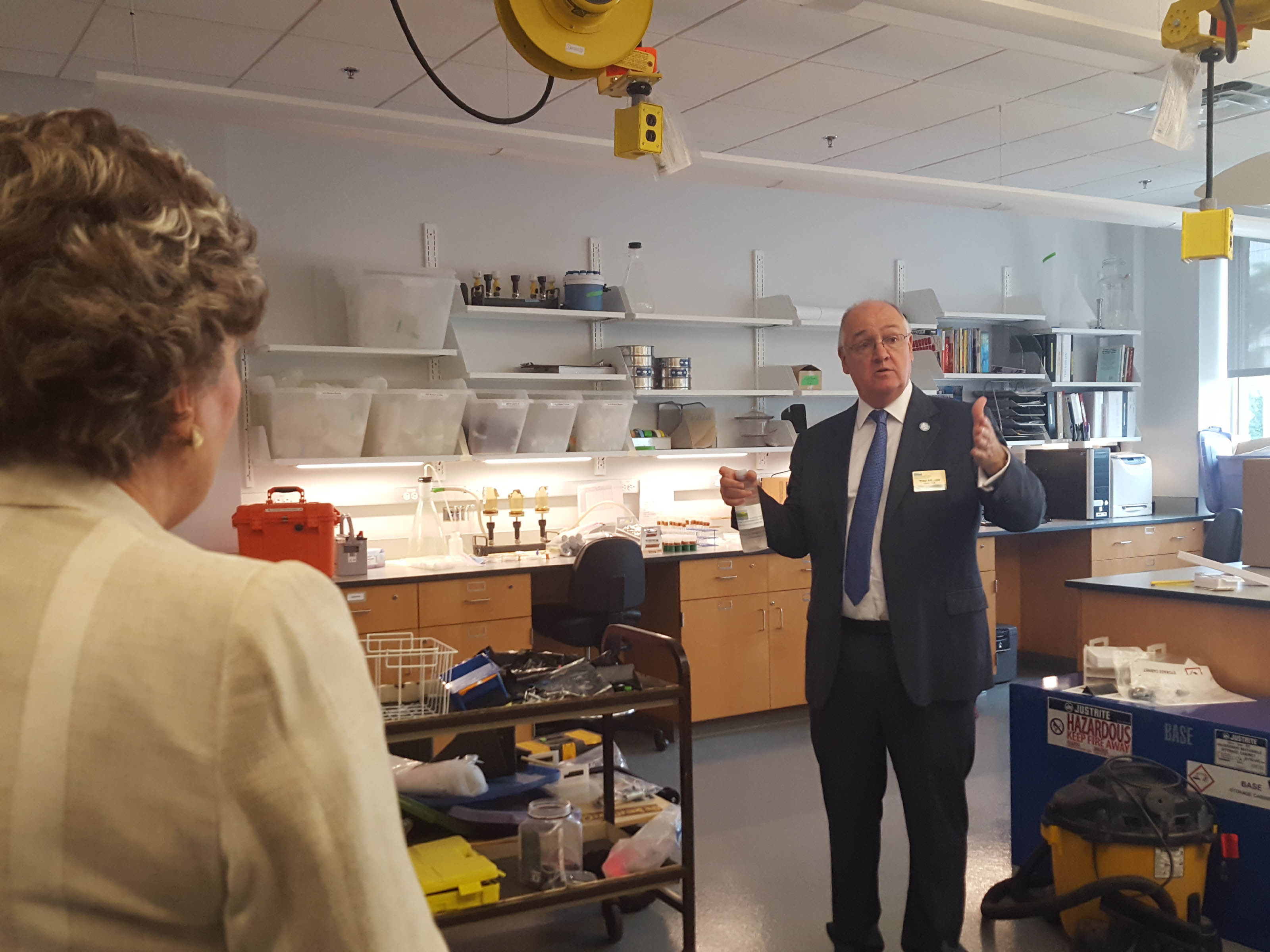 The R.V. Truitt Laboratory, the newest building on the Solomons campus, is named for Reginald V. Truitt, founding director of the Chesapeake Biological Laboratory, the first publicaly supported marine laboratory on the East Coast. The 14,000-square-foot research facility boasts five state-of-the-art research labs and one-of-a-kind experimental facilities. It includes a reverse osmosis system that makes tap water chemically pure for experiments and fine temperature controls that allow scientists to conduct experiments ranging from Arctic clams in freezing water to coral reef fish in balmy conditions, fine tuning temperatures to one tenth of a degree. Lights in the labs also can be programmed to recreate natural conditions in the lab.

This is first UMCES building to earn LEED gold certification. Heat leaving the building will be recaptured and recirculated, the air handling system detects when people are in the building and climatizes accordingly. Lights illuminate the research benches when someone walks into the room. 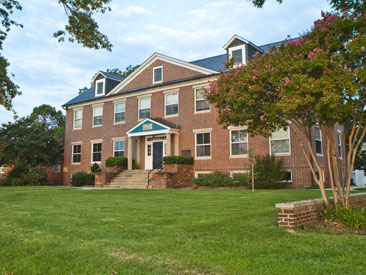 The oldest state-funded building on the campus, Beaven Hall was built in 1931 on land donated by the people of Solomons.

The building was re-dedicated in 1992 to honor Dr. G. Francis Beaven (1903-1964), a pioneering fisheries scientist who worked at CBL for nearly 30 years and was widely recognized in his day as Maryland's leading authority on the shellfish of Chesapeake Bay.

Beaven Hall is home to the CBL director, administration, and the library, as well as offices for faculty and students. 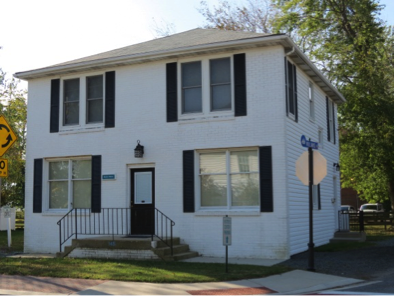 The Becker House was built in 1924 as a general store—living quarters were above and a gas pump outside—run by Gus and Sam Becker.  It changed hands later converted to a laundromat before being purchased by the state in 2000.

Now the first floor is an outreach teaching laboratory and the second floor has been converted to two apartments for visiting scientists. 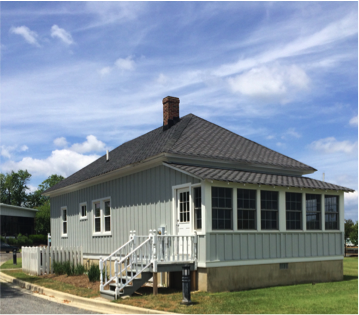 Built in 1903 by M.M. Davis as a U.S. Marine Hospital Service ‘third class relief station’ in Solomons, the Carey House was intended to attend to the needs of mariners in the region, primarily the needs of crews aboard the dredge boats during the oyster season.

Originally located on another parcel of land and moved several times, the house became part of the campus in 2000. It was moved it to its current location on Solomons Point and renovated to its former appearance. The facility is now used as guest quarters for visiting scientists, speakers, and faculty.

Isaac Solomon (from whom Solomon's Island takes its name) built this structure in the 1870s as one of numerous "company houses" for his oyster packing house workers. Most “company houses” were demolished, but the Kopp House survived and became an official part of the campus in 1978. Today it houses several faculty offices, as well as a furnished apartment for use by visiting scientists and guests for short-term accommodations.

The Library provides services to all UMCES research locations. Patrons can download journal articles and access research information through our partner institutions. Learn more about our library resources. For library help, contact the Chesapeake Biological Laboratory Library by phone at 410-326-7287, fax at 410-326-7430, or email at librarian@umces.edu.

The Maintenance Building was purchased in the late 1960s and has continuously served as the center for the maintenance and facility operations staff. Additions to the building have been added over the years. 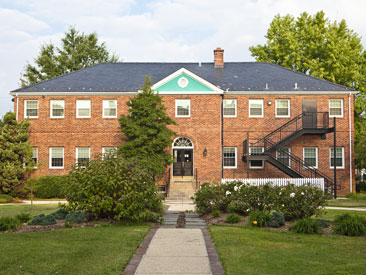 Nice Hall was constructed in 1938 and named to honor Edna Nice, wife of then-Governor Harry W. Nice. The building is home to Chesapeake Biological Laboratory graduate students as the campus dormitory.

The Northam property was purchased in 2010 and is currently used as a storage area.

Built in 1954 and acquired by the Laboratory in 1991, the Parish House was named after the Solomons Episcopal Rectory and Parish House that formerly occupie the site and had been used by CBL founder Dr. R.V. Truitt as a research laboratory. The Parish House currently serves as offices for faculty and staff. 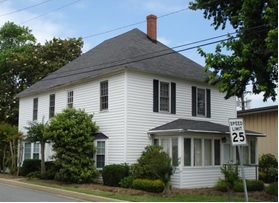 The Saunders House was built in the early 1890s as a general store and ice cream parlor run by Thomas and Bertie Saunders.

Stories are told that you could eat all the homemade ice cream possible for just a dime! In the 1930s, it became a popular gathering place for local watermen.

The Laboratory purchased the building in 1994. It is now the home to several faculty offices and meeting rooms. 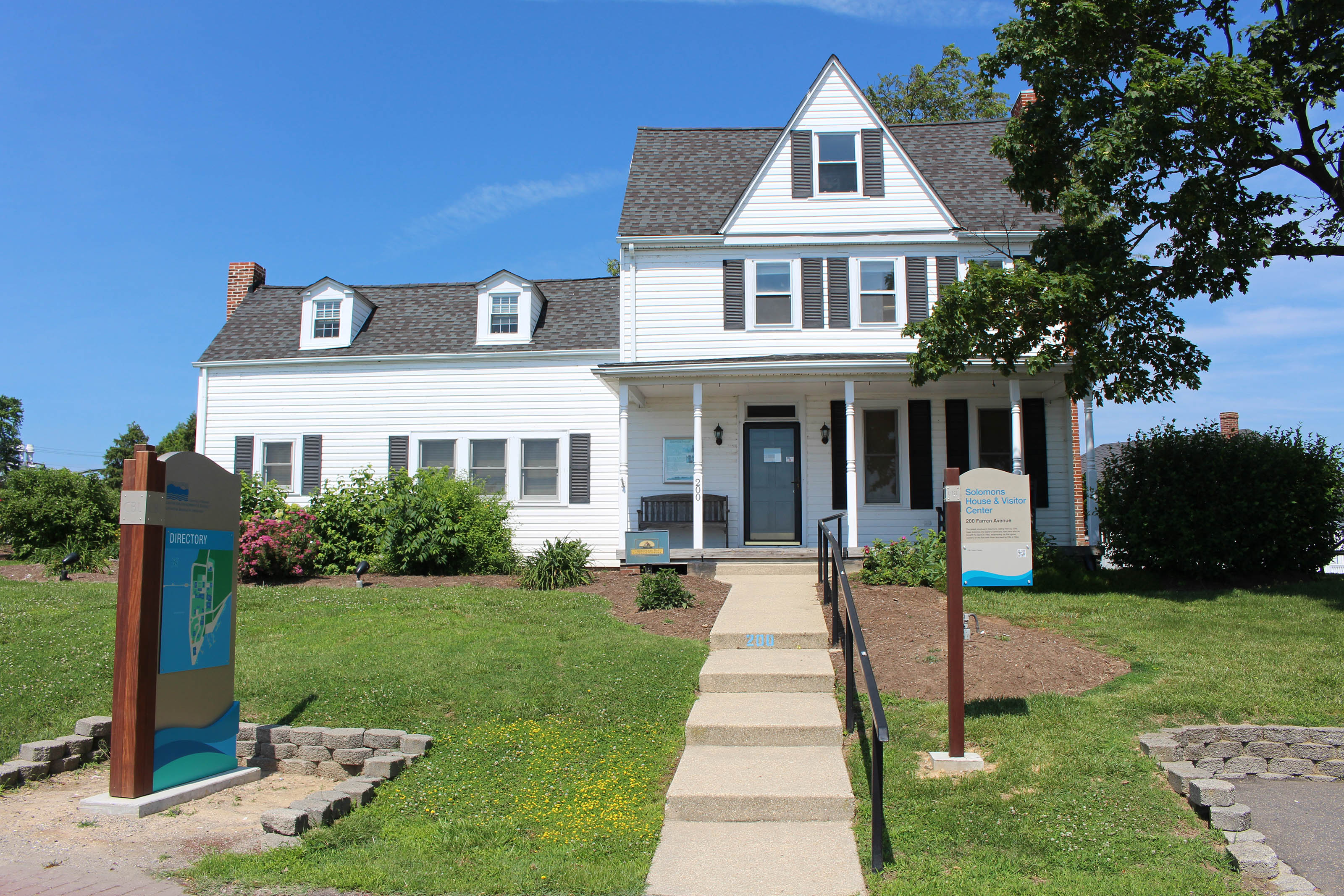 Solomons House is the oldest structure in Solomons, dating from about 1780. It can be identified on an 1814 map of the region compiled and drawn by Commodore Joshua Barney, renowned local naval hero [Barney's Flotilla] of the War of 1812.  It was occupied by Isaac Solomon, the Delaware-born businessman who established the largest oyster cannery on the Bay.  Solomons Island is named after him.

It has been altered extensively over 200 plus years. The large central gable was added in the early 20th century, as were interior modifications after electricity was extended to the island. it was purchased by the Laboratory in 1994 as part of a larger land parcel. The Solomons House is now the Visitor Center.

The Storage Building was constructed in 1995, and the parking lot and loading area were completed in 2000.  The Storage Building provides a safe, secure storage area for faculty equipment, field gear, samples, hazardous materials, gasses, and scientific chemicals. 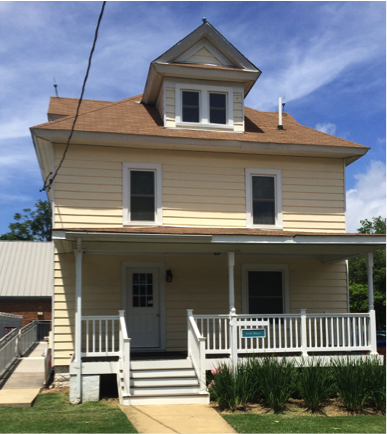 Formerly known as the Yorker House, the Swift House was acquired in 1960. This building is believed to date from the 1870s as one of a number of two-story duplex dwellings known as "company houses" built by Isaac Solomon for his oyster packing house workers. The house was later used to accommodate "overflow" patients when Dr. Marsh ran out of available beds at the Marine Hospital.

Today, the Swift House serves as office space for faculty and students.