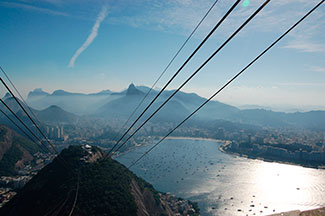 The State of Maryland and the State of Rio de Janeiro have had a sister state relationship for several decades. In 2013, the Governors of both states reaffirmed this relationship with a specific goal of focusing on increasing the health of both the Chesapeake and Guanabara Bays. The Chesapeake Bay is the largest and one of the most productive estuaries in North America. However, with a very large watershed encompassing the cities of Baltimore and Washington, DC, including a high population, intensive agriculture, and extensive industry, the Bay's nutrient and sediment levels are too high which negatively effects water quality and fisheries. Guanabara Bay is highly impacted by a growing human population from several large cities (Rio de Janeiro, Niterói, and São Gonçalo), intensive urbanization, and industries, manifesting in very poor water quality and trash pollution, impacting fisheries and quality of life for local residents. 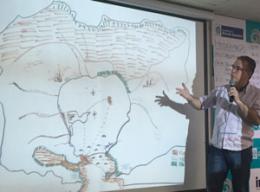 With funding by the Inter-American Development Bank, the State of Rio de Janeiro through PSAM has engaged in a Technical Cooperation with the University of Maryland Center for Environmental Science (UMCES) and KCI to exchange lessons learned and expertise while developing a status and restoration plan for Guanabara Bay.

Through this technical cooperation, UMCES is supporting technical expert exchanges either in person or through webinars, developing a Guanabara Bay environment health report card, and coordinating a science to management conference between Guanabara and Chesapeake Bays. The initial focus of this program is to develop the environmental health report card for Guanabara Bay. Two stakeholder workshops have taken place to develop the framework of the report card and develop initial indicators of health (such as nitrogen & phosphorous concentrations, dissolved oxygen, bacteria among others). The stakeholder workshops have engaged over 50 individuals from dozens of organizations with tremendous expertise.

Environmental health report cards have been used successfully around the world to convey complex scientific information in a concise and simple format. A report card is a broad-level environmental assessment of a region. It is based on real data collected on carefully-chosen indicators, which makes it transparent and defendable. This can provide accountability as well as engage communities to learn more about their environment.

The project that is being implemented by KCI for the Diagnostic of the Current Conditions of Guanabara Bay have the overarching objectives to identify, clearly explain and present to all stakeholders in the state of Rio de Janeiro:

2) The main threats to the health of the bay; and,

3) An action plan with specific short-term goals to be achieved for the environmental recovery of the bay, and to demonstrate to all sectors of society that the necessary progress is being made on schedule.

These objectives will be achieved with the support of stakeholders and the incorporation of public comment at each stage of the project.

The first report produced for the project is the Diagnosis of Guanabara Bay, which discusses and explains the relevance of the experience of the Chesapeake Bay, in the State of Maryland, for the Restoration Plan of Guanabara Bay. The report also presents an overview  of Guanabara Bay, through a summary of the existing information about the environmental conditions of the bay compiled from recent literature, including the following topics: general characteristics of the Guanabara Bay and its watershed, hydrodynamics of Guanabara Bay , Water Quality and metals in Guanabara Bay, Marine Biodiversity, Aquatic Habitat, land use in the bay’s Basin Region, the rivers of Guanabara Bay, solid waste, sanitation in the Basin, and the industries of Bay Guanabara. The section regarding the socio-economic aspects of the bay and its watershed has as main objective to highlight the most relevant characteristics for understanding the organization, socio-economic and territorial dynamics of Guanabara Bay, distinguishing gaps and issues that deserves special attention. The document addresses the issue of belonging and vulnerability of local residents and users of the bay and watershed, the conflicts between uses and users, and the local resident’s perception regarding the integration between the bay and watershed. The complete version of the report’s introduction can be found here.

The first Public Consultation Workshop for the presentation of the Diagnosis of the State of Guanabara Bay was held at the Museum of Tomorrow, in the city of Rio de Janeiro on 29 April 2016. About 180 participants attended the event, representing various sectors and institutions involved with the Guanabara Bay and its watershed. The comments from stakeholders present at the First Public Consultation Workshop were considered and incorporated into the diagnostic report delivered to the PSAM.

The presentation made by KCI in the workshop can be found here.